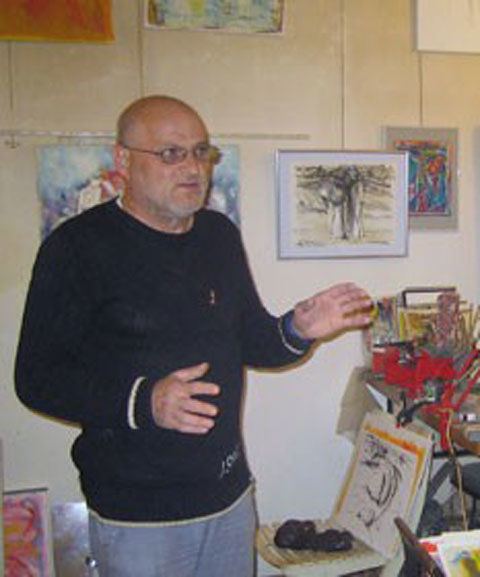 Sculptor, graphic artist and painter Silvije Arc Popovič began his artistic career in the 1970s with distinctive collages and sculptural paintings. Franc Obal, MA, the curator and director of the Murska Sobota Gallery, when writing about one of the artist’s exhibitions, said that the creator has, through the spatially functioning material paintings, opened the possibility for a different, new dialogue (unconventional for its time) and view of the status of the picture. The artist’s way of artistic creation represents one of the many fundamental principles of modernism, as it basically remains oriented towards a spatial effect and process in its architecturally conditioned perception. Silvije Arc Popovič always builds upon the drawings, and his priority is to think about matter and materiality as such. For this reason, he values every material, including industrially-made products, objects and items or even just a part of them, that he seeks consciously or discovers by chance. His choice of material is based on the process of thinking about visual and theoretical questions as well as the status, interaction and constant changes in art, nature and society. The titles of his works are further proof of this: Mutations of Form, Time and Space; Dialogues, Variations, etc. Even though some of his works might seem abstract at first sight, he has never really abandoned the figure.
The numerous accolades as well as group and solo exhibitions, for instance in Cite Internationale des Arts Paris, Galerie Moser Graz, Galerie Cult Wien, Atelje Galerija, Bežigrad Gallery and Ars Gallery in Ljubljana, Murska Sobota Gallery, ZDSLU Gallery and DLU Gallery Ljubljana and Maribor, speak to Silvije Arc Popovič as an artist on a mission as a creator, researcher and technologist.