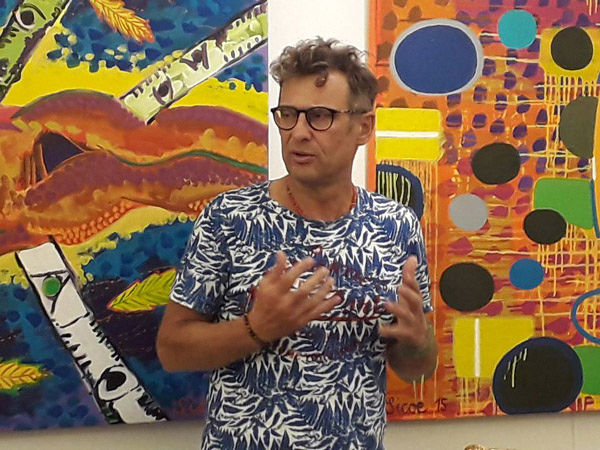 The artistic language of the academy-trained painter Sylvester Plotajs Sicoe is characterized by strong colours of a broad palette of yellow, red, orange, blue, and green hues, separated by accentuated contours into independent, confined spaces. The painter graduated in 1988 from the Academy of Fine Arts in Ljubljana under Emerik Bernard. He continued his graduate studies in painting with Gustav Gnamuš and in graphics with Professor Lojze Logar, and later went on to study with Martin Tissing at the Minerva Academy in Groningen, the Netherlands. Since 1992, he has been working as a freelance artist, presenting himself in numerous solo and group exhibitions at home and abroad, and he has received numerous awards and recognitions for his work.
He perceives the painting as a field of colour rehearsal, with which he creates a complex art story with sincere communicative expressiveness, which he achieves through depicting desires, emotions, feelings, imagination, fantasy, childishness, and relaxed joy. The intensity of the contrast between the colour and the light, which complement each other in the rhythm of the images, is balanced by a solid drawing consisting of strokes and lines, which, as the basic expressive elements, consolidate all subsequent colour layers and compositional relationships.
In addition to images from personal experiences, he incorporates images into his works from the world of film, commercials, design, photography, and culture in general, and he plays with their meanings on many levels, which convey a message to viewers only if they are aware of the context of the event painted. With this specific communication, he calls for critical reflection on certain social phenomena, and on questioning the position of painting and painters, who today often neglect the substantive power of art at the expense of the most widely acceptable visual. His sometimes provocative art has a strong message and transcends the purely figural level, critically responding to images of the everyday world that override the otherwise more important content level and meaning.
He says of his work in Študija avtoportreta (The Study of Self-Portrait): “I rework and imbue everything I see with a personal psychological stance that puts me, as an artist and human being, in a unique relationship with the external world. I knead the idea and rework it with imagination to extract the essence . . . I don’t have any rules on how to create my works, nothing is forbidden; I build up, tear down, and build again . . .”.